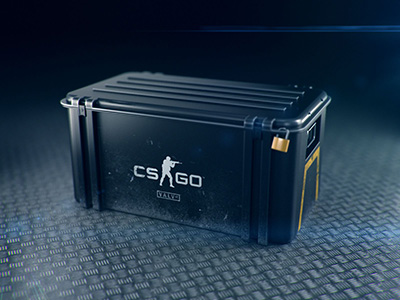 Items and skins in the CS GO. What mean items in CS GO? With the game play point of view, almost nothing, except for those items that change the mechanics of the game, in particular weapons. However, none of the players chasing that mechanics, everyone looking for beauty and high cost. At the moment, the value of items CS GO can be from one cent to ten thousand dollars (thanks precisely to the stickers). Skin that cost ten thousand dollars will not help in the game, however, it is a huge aesthetic value. Even players who are not particularly kickin CS GO, but only bet on the skins, can not resist the temptation to play a game or two with skin worth several thousand dollars. Even beauty and value, is almost entirely determined by rarity of an object. A special rarity different subjects that is can’t be found at certain point of time, these items can only be obtained from specific cases, which are usually way more rare. Some cases make it possible to obtain souvenir items that are even less usual, though do not have significant external differences with the original, the difference is a sticker that corresponds to a particular tournament in honor of whose case was released. In accordance with the value of the contents of the case, changing the value of the case goes as a result of cases the cost can vary from a few cents to hundreds of dollars. At the same time the contents of the cases can be presented not only skins for weapons, but also stickers, music, in general, all that can be in this game, except for missions.

Usually in the chest are a few things different levels of rarity from consumer goods to smuggling. Among other things there is in such a setting as a condition / reproach level – the subject can be pretty spoiled, that is expressed in the worn paint, scratches, etc., which also has a serious impact on the value of the object (such as a new AWP Medusa can cost up to 1300 dollars, and if the quality is very low or close to it – the value can fall to  300$). On the basis of cases, it was subsequently created a lot of sites that these cases to sell or operate on the principle of these cases: 1) You’re taking the case (not one of those that you can buy, and case exclusively from this site tend to expect things only certain rarity) and get random things from this case, for example, paying 10 dollars for a rare case you get the object correspondingly high rarity, but there are a lot of things compare to this category and have cost a couple of dollars, at the same time, the ceiling value of the subject of this case study is significantly higher than the ceiling value cheaper cases. Actually that is whole mechanics of the game – people buy cases in hopes of getting the most valuable item of the possible list and the completely opposite hopes for the creators of the site. Such sites are much less popular than roulette, in view of the large number of artificially created results, so most of the players in the old prefer to buy items and case studies on the Steam Store.